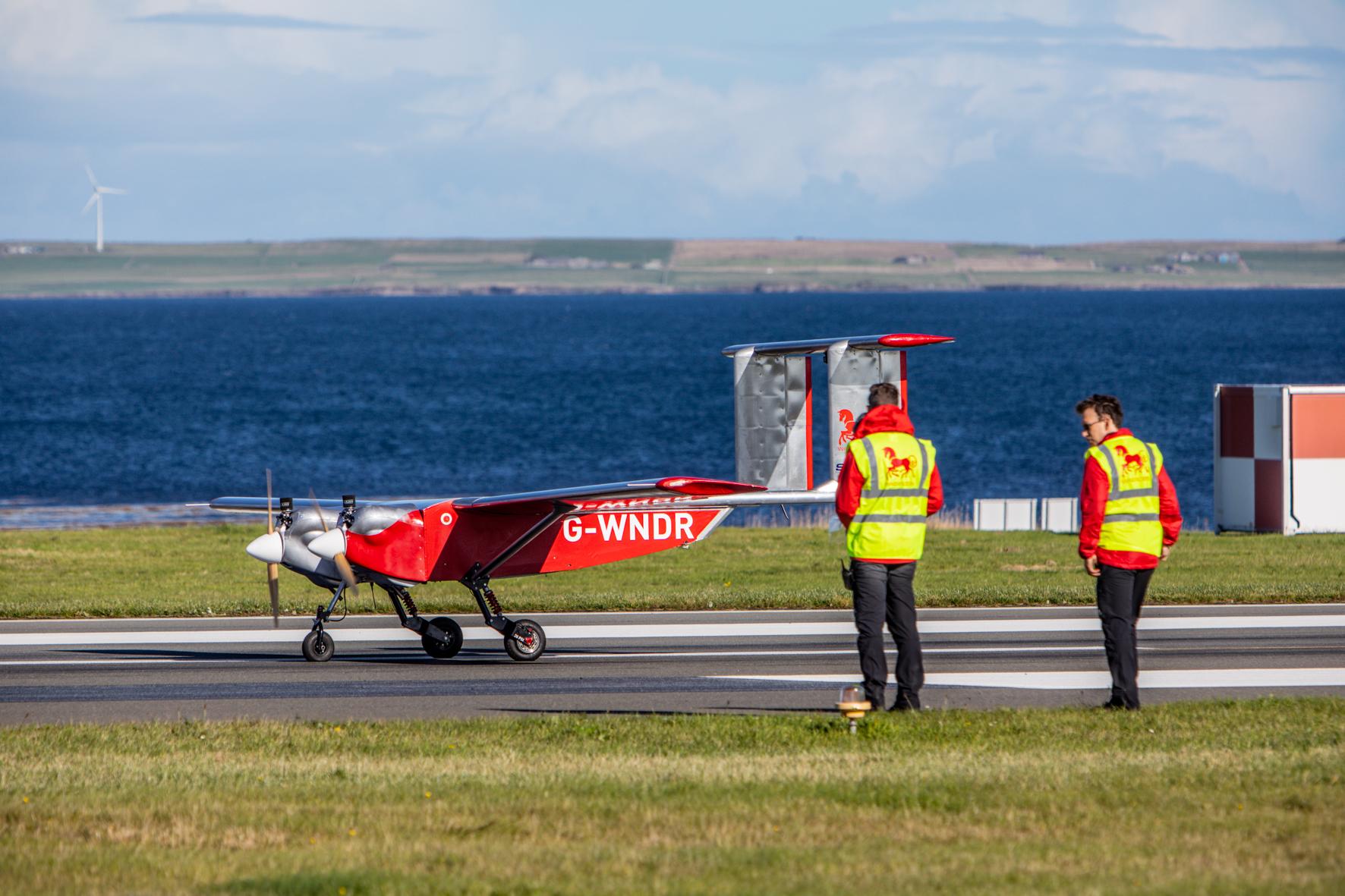 This week, the Sustainable Aviation Test Environment (SATE) project based at Kirkwall Airport supported a first for Royal Mail.

The flight trials, which form part of the SATE project funded by UK Research and Innovation (UKRI) via the Industrial Strategy Challenge Fund, will use a large, twin-engine, UK-built UAV named ULTRA. The UAV has been designed, built and operated by Windracers Ltd to carry mail from Kirkwall Airport on the Orkney mainland to the island community of North Ronaldsay, a 35-mile flight each way. Further north than the southern tip of Norway, North Ronaldsay is the furthest flung of the Orkney Islands. The trial will support the community of around 70 people on North Ronaldsay with a service that is expected to be less affected by poor weather, while reducing emissions.

The Windracers ULTRA UAV can carry 100kg of mail of all shapes and sizes - equivalent to a typical delivery round - enabling the transportation of all mail bound to and from the island community of North Ronaldsay. Letters and parcels will then be delivered by the local postie in the usual way when they reach the island.

If the trial is successful, the technology will be considered by Royal Mail to support postmen and postwomen in delivering to very remote areas and addresses across the UK. UAVs can fly in poor weather conditions, including fog, because they are uncrewed, and unlike boat services they are not affected by tides. This could make them well suited to help Royal Mail better service remote island communities and provide deliveries in all weathers while also helping to protect some of our most beautiful environments.

The trial is part of the SATE project based at Kirkwall Airport operated by Highlands and Islands Limited (HIAL) in the Orkney Islands, Scotland. The Windracers UAV trials will demonstrate how this technology can be used to provide real-life service demands and improve connectivity between remote communities.

The SATE project is part of the Future Flight Challenge funded by UK Research and Innovation through the Industrial Strategy Challenge Fund. Led by HIAL, SATE is the UK's first low-carbon aviation test centre embedded in an operational airport. The project is hosting trials of aviation technologies including low-carbon aircraft and UAVs.

This is the third drone trial that Royal Mail has taken part in over the last year. In December 2020, Royal Mail became the first nationwide UK parcel carrier to deliver a parcel for recipients via drone to a remote lighthouse on the Isle of Mull in Scotland. In May 2021, Royal Mail delivered two more UK firsts: the first UK drone parcel delivery beyond visual line of site with Windracers Ltd, and the first inter-island deliveries on the Isles of Scilly.

The trial will also test the environmental benefits of this technology, as part of the Company’s continued drive to reduce emissions associated with its operations.

With the UK's largest "Feet on the Street" network of over 85,000 postmen and women, Royal Mail already has the lowest reported CO2e emissions per parcel amongst major UK delivery companies. The expansion of alternative fuel vehicles also demonstrates the company’s commitment to reducing emissions associated with its operations, and to delivering a cleaner future.

The trial and potential introduction of low emission vehicles, such as UAVs, will help to shape Royal Mail’s long-term environmental strategy, to meet its goals of delivering a cleaner future.

Dougie Cook, HIAL’s General Manager North, said: “This is a significant trial for UAVs that form an important part of the SATE project. The facilities at Kirkwall Airport provide an ideal testing centre for this innovative application of UAV technology, which could bring practical benefits to the communities that HIAL serves.

“The SATE project is an important collaboration for HIAL and allows us to work with partners who are leading the way in sustainable aviation on a global scale.  We are committed to being at the forefront of Scotland’s efforts to transition to a low carbon future.”

Nick Landon, Chief Commercial Officer at Royal Mail, said: “At Royal Mail we care about delivering a brilliant service for all of our customers, wherever they live in the UK. We are also incredibly passionate about protecting our diverse and beautiful environments. This trial is designed to help with both of these goals, using the most innovative technologies to support the remote and isolated communities we serve in the greenest way possible. The trialling of drone technologies is just one of the ways we are supporting our postmen and postwomen to deliver an amazing service, while reducing our carbon emissions.”

Charles Scales, Chief Executive Officer at Windracers, said: “Windracers is delighted to be operating one of our 100kg payload ULTRA UAVs to North Ronaldsay for Royal Mail. Our autonomous system will deliver an all-weather service for the community and significantly lower carbon emissions. We would like to thank our SATE project partners, HIAL, the University of Southampton and Innovate UK.”